Hello to everyone. Just a quick notice that it will be while before I continue What Different Eyes See as a result of a lot of abuse by a local stalking cult I've mentioned many times in prior posts and elsewhere.

I spent the last weekend writing As If Magic Was Enough, a short piece and concise piece for A Lady's Prerogative just so that my readers of that series did not feel left out or neglected.

Not long after I'd started work on it did the harassment and abuse begin, not to mention a lot of identity theft and swapping attempts by the local hate gang I've been exposing in Toronto, Canada. They're actually still going as I write this post.

So instead I've been working on Shhhh! For Windows where you can see some of my coding progress below using one of the built-in screen capture tools in Shhhh!: 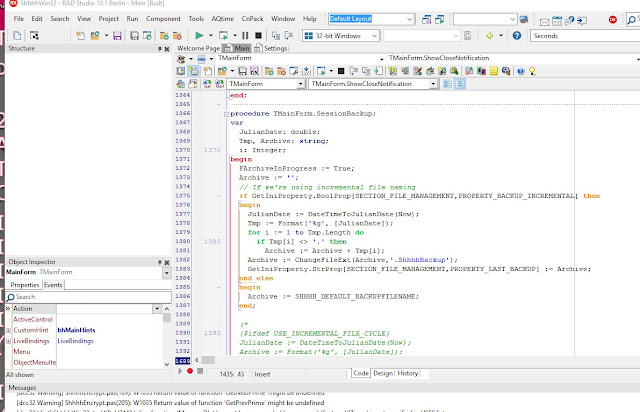 Coding takes me in a different direction and is a good way to stretch and recharge for creative writing. I certainly need that if I'm going to see What Different Eyes See through to the end. So sorry for the delays but it's more to do with abuse from a local gang than anything.

Often my efforts are stolen by a local gang and the credit for my stories is often given to others, while the same gang tries to apply the identity of a narcotics dealer or pirate to my own identity. Seems to be a social cult that steals the identities of others they spy upon illegally. As I've said before, I've reported them to the authorities a few times. Likely it won't be long before they're busted as I've seen it happen before with a different group of people doing the same thing. The cult in question use illegal eavesdropping and identity theft to steal the creative properties or work efforts of others and give those credits to their members. The cult and gang also makes other people pay for the consequences of their cult members' actions in their place. So if they get mixed up in illegal activities, they attempt to put that onto someone else in their proximity often who is not associated with them at all. I've become a victim of this more than a few times and by neighbors in my building, often for someone named Terence or Clarence, both of whom I don't even know.

So it will be a bit before I finish What Different Eyes See (for The Butterfly Dragon) and Evan And The Ironsides (for A Lady's Prerogative).

One thing that I can be very grateful about is the fact that my health seems to be very good as I recently got the results of a blood test back. I thought that I would put my confidence in Western and Eastern medicine and seek a way to help me combat the stress caused by the abuse of this cult and was given a pharmacological solution by a Doctor recently which acts to reduce stress and severe mood swings resulting from stress and social abuse. I'm 49 years old and at 6 feet tall and 180 lbs, I seem to be holding out well and keeping healthy for a guy with green eyes.

In the future after the conclusion of What Different Eyes See, I'll be taking the Butterfly Dragon for a different turn into the real world for a series of articles that will be published here highlighting researchers and treatments and how that world crosses over into other venues like fashion.

Recently in the gaming department I've been hooked on Elite Dangerous: Horizons (as Commander Serene Jeong Tokama) and Skyrim: Special Edition (as an Orient inspired good vampire) spending many (but not nearly all) of my off hours on those two games. As mentioned in What Different Eyes See, the world of medical research has been profoundly impacted by video games in the fact that the improvements of video game hardware and rendering engines have directly contributed to progress in medical equipment, software and research via distributed computing not to mention the stream of dedicated gamers who game to raise money for charities much the same way The Butterfly Dragon does.

Just to note, when a developer releases a title on Steam, they pay a one time fee of $100 which is donated to a Children's welfare charity. Other charitable sites like Humble Bundle have monthly bundles that can be purchased for a price that you choose, with some or all of the proceeds going to charity. I will be speaking of this more in a future article and post.

Anyway, I'll try not to leave Heylyn, Monique, Alicia and Valerie in limbo for too long. I believe they're in the midst of protecting tourists from what appears to be an attack near the Forbidden City in Beijing while the delegations are being escorted to cover by their respective security detail. With two more cities still in their itinerary can the Tynan Delegation uncover Future Tangent Industry's plot and win the support of the Asian Alliance?

Until we visit the story again, perhaps you can help in the name of the memory of some real world heroes: Dana and Christopher Reeve, Princess Margaret Foundation and Sick Kids Foundation.