Here's the final design of the Butterfly Dragon's costume. I struggled for a long time over the design and especially the colors of the costume finally coming up with this.

Her wings are actually non-corporeal, they're translucent and mostly for show however in the Butterfly Dragon II: Dragon Butterfly that will change as will her abilities.

The most notable changes are with her armored vest, her gloves and her boots as well as her leg armor.

I've been refraining from writing for a while and recharging and working in other areas for the time being. I haven't given up writing, I'm just taking a break for some time and concentrating on some other things that might make writing a little bit easier and stress free in the future.

Well here it is.

Enjoy and thanks for reading my stories and most of all for your patience.

Brian Joseph Johns
Oh and yes, I shaved my head. 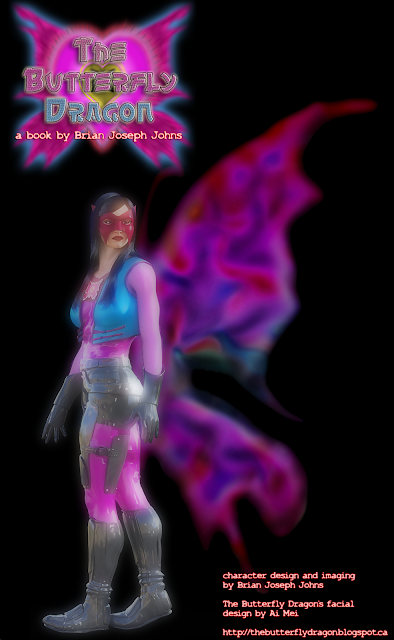 Having been working on the design elements for a number of the Women characters over the last few years and recently releasing a design pic of Athandra Rithyani from my other book A Lady's Prerogative, I thought I'd have another go at the designs for one of the men of The Butterfly Dragon, the CEO of Tynan And Associates, the company that eventually funds research on the miraculous SY349 formula.
Drawing my inspirations from two (former) leading males from Hollywood and at least one real life CEO and what I imagined him to be like, I was able to put this together using Daz3D and Adobe Photoshop.
Walton Norler is a major character in the first book, The Butterfly Dragon I: Heroes Of Our Own and will be similarly as pivotal in the second book. He is a charismatic and benevolent leader for Tynan And Associates having saved them from the clutches of Grier Torman, his former boardroom nemesis. His vision is to change the world for the better from the boardroom and through the guidance of the company as CEO (see the image below).
In the proof that beauty just keeps getting better with age department, I read a recent article that Julie Newmar would be providing the voice for the Catwoman in an upcoming Batman animated feature alongside her voice cast mates of Adam West and Burt Ward.
She is one of the most iconic characters of the Superhero world bordering the fine line between superhero and villain. Julie Newmar is an important proponent to the empowerment of Women and at the same time a sex symbol and an important inspiration for some of my characters. Someone who could wield the power of their sexuality while relying on their wit, wiles and prowess to overcome their obstacles having a little fun along the way.
She's just as beautiful and seductive fifty years after the first episode of the Batman television series aired proving that beauty indeed does get better with age both externally and internally. I would say that she is perhaps my favorite embodiment of Catwoman (with Michelle Pfeiffer's and Anne Hathaway's bringing in a close second). Perhaps each were a different kind of Catwoman for a different era and different sensibilities.

In other news, Margaret Atwood, an important Canadian literary hero of her own has released her superhero book Angel Catbird, which has become a graphic novel produced by Dark Horse. Margaret Atwood has a long list of best selling fiction and numerous awards for her work as an author and Canadian icon.
Enjoy!!
Brian Joseph Johns
at August 24, 2016 No comments:

Something To Keep You Warm... 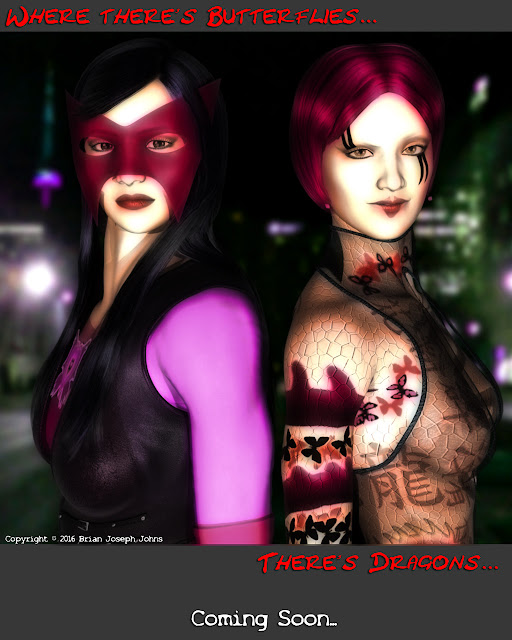 The Butterfly Dragon II: Dragon Butterfly
Also...
Every tale has a beginning. 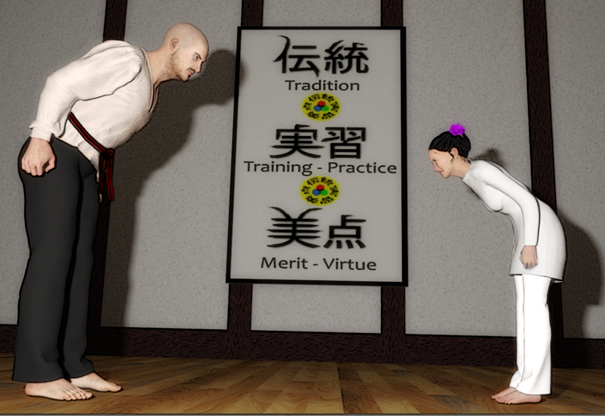 Even for a little girl named Ai Yuanlin Ying.
The Butterfly Dragon I: Heroes Of Our Own Full Edition 2
-- The story right from the beginning --
-- Ai's early beginnings down the path to becoming Heylyn Yates: The Butterfly Dragon --
-- Alicia's early childhood and life before becoming the inventor of the SY349 --
-- Heylyn's first love and her greatest tragedy --
-- More Walton Norler --
-- More Grier Torman --
-- More Valerie "Valkyra" Aspen --
-- More Monique "The Eclipse" Defleur --
-- More Mr. Zek --
-- Introducing Warai Jeong Min Tokama, one of the leads from book II --
-- New artwork for many of the chapters --
-- And of course more Weltherwithsp --
Learning how to get up also requires us to know how to fall...
Morgan Kyoshi Sensei
Brian Joseph Johns
at August 18, 2016 No comments: 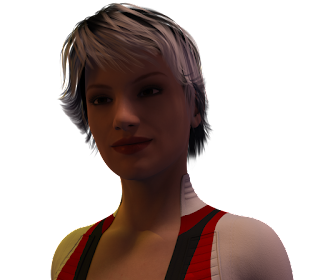 We just arrived back in the ship and our prison in the cargo container. You would not believe what has happened since my last entry so I'll go step by step here and do my best to explain it. Keeping in mind that none of this is made up.

I boarded first at a port in Bangkok as a Ukrainian immigrant. Heylyn, my best friend boarded further on in the East (somewhere near GuangZhou where her parents are originally from). She's a native of China though she came to Canada when she was a little girl. Somehow though she couldn't leave the Butterfly behind because it followed her and found her for certain. So did the Dragon though from how she talks about the Dragon I'd say that we have two different understandings of Dragons. In the West they kidnap virgins and horde the treasures of their vassals (can you believe I actually remember that word from my history classes?). In the East they are sometimes harbingers of good fortune and wisdom though from them, you earn what you get what you deserve. I kind of think that's why so many people don't like them. They know they're going to get what they deserve. Kind of like Karma. Speaking of Dragons, Weltherwithsp actually showed up! I mean a full sized Dragon floating through the air like a flying snake with butterfly wings! I have to get to that part though and there's a bit. Don't mind the writing as I'm kind of cramped up in the cargo container we've been imprisoned within.

So a few days after we left the last port, the crew showed their true colors and imprisoned us as cattle for their human trafficking ring just as Heylyn had suspected would happen. We'd been confined with an assortment of people who'd also procured transport on the ship. Most of the guards are armed and mean. Thankfully nobody has been shot yet but I've seen a few of the guards eyeing some of the older captives as if they were going to pull the trigger right there and then.

I've been holding back really, because I know if I really let fly, I could take out the entire cargo hold of guards. Heylyn warned me not to do that though. She said we have to hold back. We don't want the guards. We don't even want the superiors of the guards. We want the people organizing this whole human trafficking operation. We're not the only one's anymore either because there's some other people hunting them too. Magical ones though I never thought it was possible but it is.

They're like a secret society of magicians and philosophers who protect us all the world over. All of us the whole world which consequently they call the Aerth. They operate from a United Nations of magic and the planes that they call the Sanctum. They represent every culture the world over though they too have their squabbles. Getting along isn't always so easy and sometimes even when its the people who are supposed to set an example for other. One thing I noticed about them is that despite the fact that they don't all get along, they never hold a grudge against one another. They keep on keepin' on as my hard working Ukrainian tradesman father used to put it. Maybe they do set an example that we haven't seen.

So we encountered them at their Sanctum, which is like their secret base of operations except that it isn't a part of our world. It's like in another dimension, so it overlaps ours but we can't see it. We traveled there thinking they were our enemies, deceived by their arch-enemy Lorr, whom they refer to as a Power Lord. This Lorr stood us down and it looked like the end for us until Heylyn's Dragon friend showed up and challenged Lorr. Lorr chickened out against the Dragon. I guess for the same reasons that most people are afraid of Eastern Dragons. They're /creatures of heart and good intent and harbingers of good fortune to the like, though don't mistake them for people of that sign. You have to earn being a Dragon after all. I guess this Lorr wasn't so good and knew that the wrath of Heylyn's Dragon would best him.

So after licking our wounds, here we are back in the cargo hold of a ship that is supposed to rendezvous with our target: the traffickers. The ones who call the shots. So we've just got to hold out until then when we can show our true colors.

So for now as my French Mother always said: there is nothing you can't overcome unless you convince yourself you can't.

With Heylyn Yates, my best friend and a group of Wytches and sorcerers backing us, we should be able to overcome anything.

Don't forget that hundreds of years ago the ancestors of these Women, the Wytches were hunted down to the point of extinction. They've seen much in their time including the Witch trials, the Suffrage throughout two World Wars. They returned, their hearts and minds true ready to right the Aerth before she's led astray and onto the path of destruction by those who care little for life or the future.

It will be a while before the next chapter. Hang on. Please.

PS: Eugene F. has nothing to do with The Butterfly Dragon or A Lady`s Prerogative or with this blog.
at August 08, 2016 No comments: