To help you get a better picture of the characters as I think they appear, here's Monique Defleur aka The Strawberry Ecclipse. Her information and background can be found on the Characters And Info page. This image and her design was created with the great visualization and rendering package Daz 3D, the legendary Adobe Photoshop under Microsoft Windows 7 (64 bit), though Monique being a little bit technical herself is both a PC and a Mac user. It was quickly rendered with an HP Minitower. 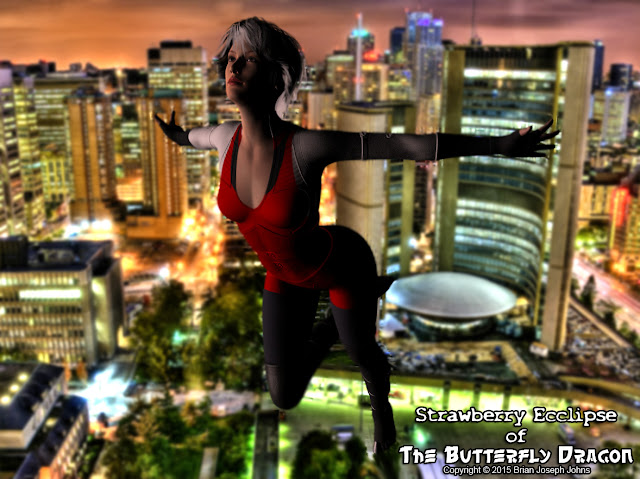 You can expect some future concepts as I acquire more assets to create the design elements. A lot of work is needed to fill out her costume. I pictured it being sleek, to show off her amazing figure and allow her to move quickly, an aspect of her character. The costume is actually part of a Heylyn Yates design, that is supposed to come with a shawl for a night out on the town or even on the fashion runway. It was what she'd chosen as her "power costume" when Alicia allowed her to use the SY-349 formula on Treadwater Island during the takedown of Mr. Zek. Her name comes from her love of strawberries and being a night person much like Heylyn. You can expect Heylyn and Alicia concepts pretty soon too as the next scheduled for similar visuals. Then Valerie, followed by the Dragon Butterfly. They are considered reference material for real artists to get an idea of the character beyond what was written for those characters.

PS: You might notice a lot of long winded posts coming from my http://poetryandfiction.blogspot.ca blog. As I've related in posts before, I am quite frequently stalked and abused by a local cult, who attempt to steal the good aspects of my books, while dumping the bad aspects of those cult members onto me only to abuse me for them (24/7). I am sorry, but that`s a truth of what is happening to me whenever I write new chapters for the books.

While I wrote all of A Lady`s Prerogative II: Wounded Aerth, I went through that kind of abuse 24 hours a day 7 days a week for about a year and a half. It was the cult "milking" the good of what I was doing for their own credit, while trying to dump their bad onto me in order to hit my love interest and my readers. I am sure that many other people experience the same sort of thing.

I don't apologize for what I've revealed about this abusive cult in my Toronto community who overstep many boundaries in order to achieve their goals (including illegal surveillance by civilians and electronic harassment), of which I am both ashamed as a Canadian and embarrassed for as a Torontonian.

I hope that such exposition of this cult does not affect people's notions of Canada or Toronto because for one author who chose to showcase his home city, this is not what Canada is about. This is a group who've learned that they can take from the efforts of one person for the betterment of others while giving back their bad. In other words, an organized attempt at stealing from someone based upon the idea that if you react negatively, you lose your good and inherit their bad. In no way, do the colours of Strawberry Ecclipse represent such a paradigm, as she is not a Nazi nor does she represent Nazi ideals. I do have a great love and respect for German culture and people. Nor does she engage in the theft of others' good while dumping her bad.

Instead she has a minor troubled past which she'd rather keep to herself, while progressing to a better and brighter future that spawned from the opportunities that an immigrant from the Far East of Asia named Heylyn Yates (aka Ai Yuanlin Ying aka The Butterfly Dragon) brought to her by hiring her as a model for her company West Meet East International.