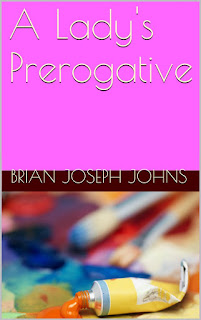 At 4 AM EST, A Lady's Prerogative: The Full Edition hit the book shelves at Amazon.com. As promised with each and every one of my books, 25% of what I make on each sale, will be donated to charity.

The Full Edition contains content not available in the online edition including new chapters and character back stories and new events that were not written about in the freely available version of the book as it is the first draft edition and also as promised, the first draft will always be available freely from this blog. When you buy the Full Edition ebook, you'll not only be supporting the author who wrote the book, but charities related to the book's plot elements. Much of the financing (based upon my budget allowances after the charities have been paid and financial responsibilities have been met) will be reinvested back into the series to pay for art and expand the media types covering the story's universe.

The Full Edition of A Lady's Prerogative: Wounded Aerth will be released in as little as four to six months, pending new additions and back story content and even new characters. Details such as the story of Tanara Milaise, Tobias Mesky and even the formation of the hunters and their first quarry under Exeter and of course Alivale's place as the headquarters for the Culdar Rath in 1654 are among the stories and chapters being added to the book.

The Butterfly Dragon: Heroes Of Our Own - The Full Edition, will be available as the next ebook that I release for sale on Amazon and it too will contain a lot of added content including a romantic back story for Heylyn along with stories of her path through the martial arts, Valerie's early years up until meeting Torman, the year surrounding the invention of the SY-349 formula when Alicia first becomes the super hero Night Style and much more. As well it will support charity under the same arrangement and percentage upon each sale, of course targeting charities related to the plot. Likewise, finances based upon my own budget considerations will be reinvested back into the stories to pay for art (possibly even t-shirts or West Meet East clothing representing each of the characters from the story). There is a lot of possibility and of course it will operate under the same charitable donation model.

I hope that this takes off because I'd like to see both of these stories blossom into something big.

Thanks for your time and your support as readers,