Warning! There has been a sighting of the mysterious Dragon lady...

Origins: Unknown. Presumably from the Far East of Asia much like The Butterfly Dragon, Heylyn Yates (who is also known as Ai Yuanlin Ying).

Description: She dresses extremely provocatively, almost to the point of being a caricature of what some might find to be seductive. She can often be found wearing an open top shirt, the center of her chest exposed down to the naval. Her lower half is adorned by a short skirt and high heels. Her entire body below the neck is covered by tattoos, each depicting some aspect of her own life or her eidos and world view. Many are written in Traditional Chinese, Japanese with some in English. She is also tattooed from the neck down with "scales" that are rumored to become hardened when she is threatened.

Rumor also has it that she is a grand wizard master level mixed martial artist though nobody who has crossed her has lived to tell. Witness accounts say that she easily crushes even the heartiest of foes despite the odds and even their overwhelming numbers. Her demeanor differs from that of the lady referred to as " The Butterfly Dragon". The Dragon lady seems focused on spite and vengeance where as reports indicate that the Butterfly Dragon is a protector of sorts though that as of yet is unverified.

Further rumors indicate that the Dragon lady is often accompanied by a mysterious floating apparition which authorities believe to be a bird or other avian though there have been reports of it's length being as long as fifteen meters. There are currently no avians on record whose length is fifteen meters.

Warning: If you encounter this Woman, do not approach or attempt to confront her. Upon sighting her leave the vicinity immediately and notify authorities of her whereabouts. 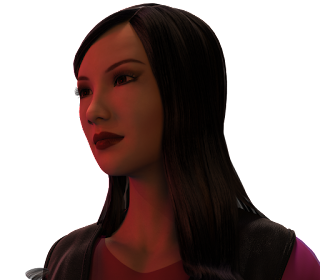 Keep in mind that Heylyn Yates (aka Ai Yuanlin Ying pictured to the right) who is a heroic leading character from the first book and the central role of the second book is a Chinese immigrant with a heritage that ties her to much of the Far East of Asia. She is also the character from which the book is titled.

{The above image was created with Daz3D, part of her look is by an aspiring 3D artist known as Ai Mei (whose work also give's Heylyn Yates her beautiful facial appearance) and a custom morph target created by Brian Joseph Johns with Newtek Chronosculpt. Her hair is by the poser artist known as Kozaburo. Her tattoos and makeup were all hand drawn by Brian Joseph Johns. The picture was rendered in Daz3D with NVidia Iray raytracing technology. It is interesting to note that there is another designer of fashion with the "handle" Kozaburo whose underground and post-grunge original designs you might like. They take me back to my early days as a Goth. }