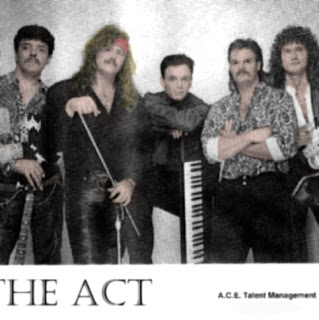 Thanks to the wonders of the internet I recently was able to reconnect with some people from my past. You see, another lifetime ago my friends and I were rising rock stars. That's right.
From left to right we're Peter (bassist), Chris (lead vocalist, acoustic guitar), myself (piano and keyboards with my Korg M1 in hand), Blaine (drummer) and Tom (guitar). At that time we were known as The Act, though we'd gigged together for about two years as Standing Room Only or SRO for short.
They were a great bunch to work with and we have some pretty funny stories from those times though we took our work as musicians very seriously. We'd written and produced many songs together which we'd perform live of course. We often worked under the name SRO which would often feed the band's expenses while The Act was promoted for its originals. It was very much run like any business and it was done professionally.

Most of our recordings are lost to time or possibly buried on tapes somewhere in somebody's basement. Recently, local radio personality and music supporter Al Joynes posted this video of us opening for Lee Aaron at the Purple Onion in Oshawa in 1992 alongside our billing.

Lee Aaron by the way has just released a new album and appears to be aging backwards. Time has been kind to her. All the best Lee, Judy and Sue (from the Purple Onion management). 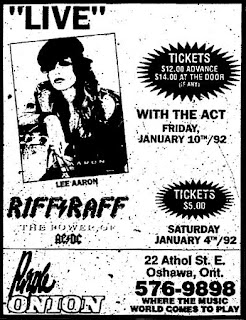 Thank you to Peter, Al and the Purple Onion management for these preserved memories.

I've since moved on and become a Buddhist (with an edge) since 2008.