A Walk On The Danforth...

Today I woke up and decided I needed a little emergency cash to placate the starving author/artist in me for a bit, not to mention that it feels great to use your body. You feel good and to tell you the truth, my monitor tan just isn't really cutting it these days. Besides I might want to attract the right Lady Butterfly (she's Chinese) some time in the future (hopefully after the print version have sold a few copies).
So I the brilliant idea of checking out the gigs on craigslist.org. Low and behold when I spied just the kind of thing I was looking for, I called and was on my way. Its amazing how technology can link people nowadays. When I was you're age, I used to have to walk six whole minutes to the bus stop! Now you youngsters just teleport everywhere! Oops. That was from another story. Where was I? Oh yeah, on my way to the site.
So after finding out that my bicycle had a flat and after trying to patch the flat a number of times, I gave up and began my long walk to the job site.
The trip took me through one of Toronto's great communities (amongst many great communities but it was this one upon which I journeyed today). The stretch of Danforth between Broadview Avenue and Pape Avenue which is a scenic and lively place. There's Cafes, Restaurants, Patios galore, Health Food Shops, Fashion and Technology, you name it. So on my way there (back) I mamaged to shoot some photos which I thought would be good to display during Toronto's Pride Week and in general because the Danforth is a great place for Cafe and Patio hopping. Nothing but people enjoying the restaurants or having a coffee, maybe an artist or two with their Mac or PC laptop etching a design or two. Mothers walking their hot rod modded baby carriages and a few animal lovers walking their pets (or pests depending upon your point of view). If you come to the city during the summer months, then check this place out on a Thursday or Friday late afternoon early evening or on the weekend. There's just so much to do and the community is really colorful and beautiful.
Naturally this attracted my attention for obvious reasons. A Fashion store worthy of the name Butterfly... 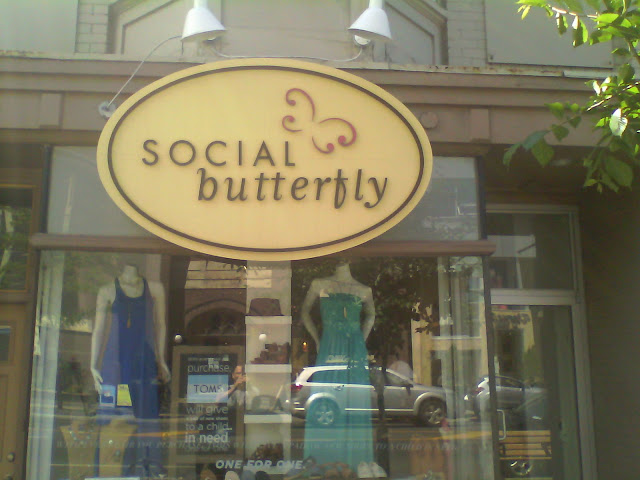 I tried not to be intrusive and picked patios with a lot of color and activity when I could. Generally in the late afternoon or early evening though you'd see a lot of action. Especially on Thursday and Friday. You might even spy a few superheroes too. I even here this is Dragon Butterfly's turf some time... 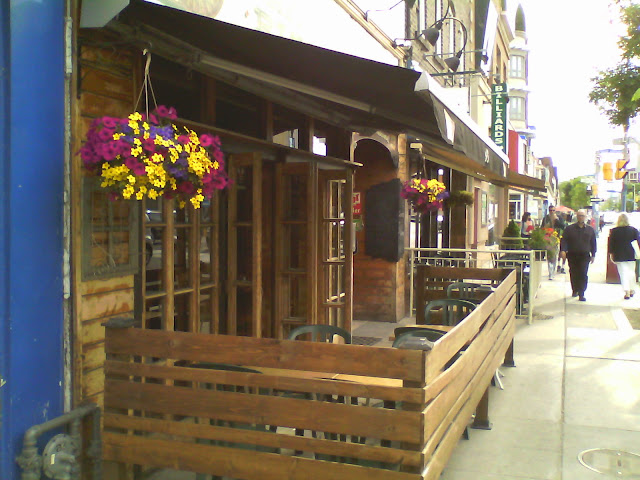 There's a lot of great restaurants offering regional cuisine to suit your tastes.  Some even have their own house brew on tap and wine too. I hear that Mishima Sato himself (of A Lady's Prerogative fame) even frequents this place... Beside it, Avli Restaurant might be Barris' turf though he also tends to like the Pubs where he can often be found reading. 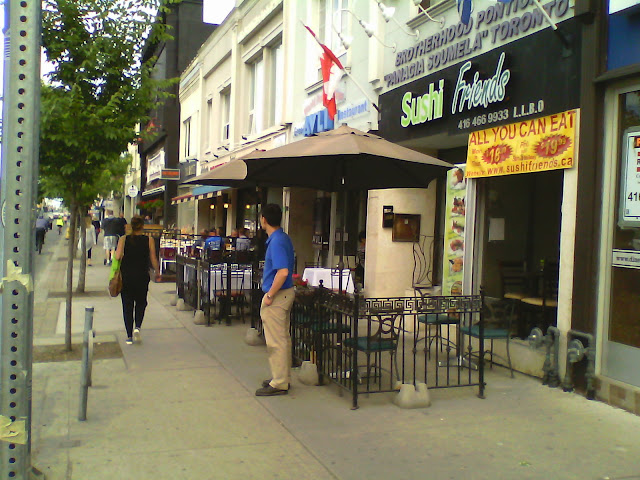 Here's everyone's favorite Factory Girl. No, they don't make girls but I'll be you'll find guys and girls here and often. I do believe the reference is to one of the chefs or bartenders (possibly the management or owner) and the fact they can just keep putting it out for the customers. Now after having checked out their web site I am floored! But you can only find out what it really means if you check out their site.
I mean that. Honest. You better have checked out their site. I mean it. Really I do. Pretty please with sugar on it? 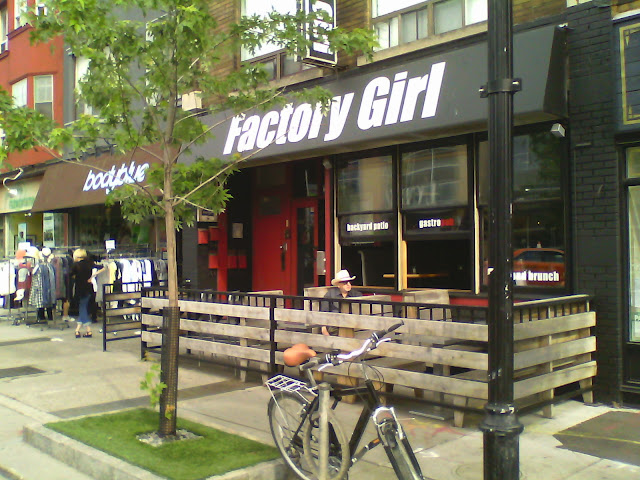 Naturally on the job site I need to pick up some nails at Urban Nails. I stopped into this place and was so astounded with the paint job I got on my cuticles that I left without my nails so I stopped into Terri O's. Terri told me they only had O's there. Maybe next time... Well that Dora Keogh looks a tad bit Gaelic to me lass and lads. It must be a name because when I tried to translate it, I got the same thing. Maybe its a secret. Maybe it's Oard Gekoh? Who knows? I'll bet they have some great pints in there if you like that kind of thing. Perhaps even some great cuisine. Right beside it is Allen's. I think Allen works on the web stuff while Dora cooks up a hospitable meal and brings the pints.

I also tried to translate Allen's on Google and I got: The creator of great food and drinks that is positioned beside another great restaurant named Dora Keogh on the Danforth. Moved originally from Belfast over six hundred years ago, relocating the family businesses to the largely unpopulated spot just a few miles north of Lake Ontario in the brush. Five hundred years later a city, and The Danforth emerged around them. Can you believe that? Little did they know that several of the Fashion, Pet Shops and Health Food stores had been operating for over nine hundred years in another part of the brush. You can just learn so much online...

Of course you could check out their unique and neighborly cooperation online at http://www.allens.to. 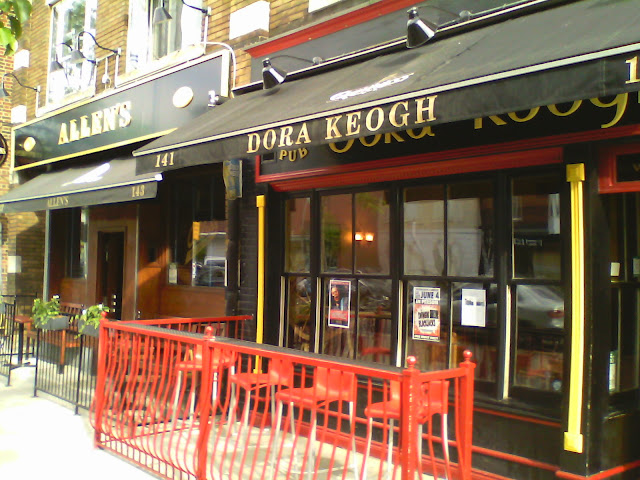 The Black Swan is a historical landmark on the Danforth just East of Broadview Avenue. This earthy place is a great place to hear live bands as well as play darts and have a few pints. Next to Allen's and Dora Keogh, (and a few fashion shops, pet stores and health food shops) it is one of the first fixtures of its kind along the Danforth. 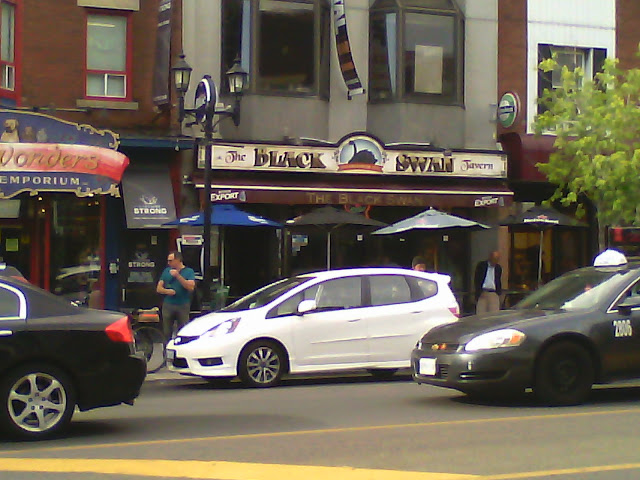 This is The Old Nick on the Danforth. Possibly because of someone named Nick (notice how the N is capitalized for a quick lesson in etymology). I don't know much about them but after reading their blog, I'm quite impressed. Check it out yourself by following the link or clicking on the image. Consequently I used to have a friend named Nick in school when I was a kid. I wonder if it's the same guy? 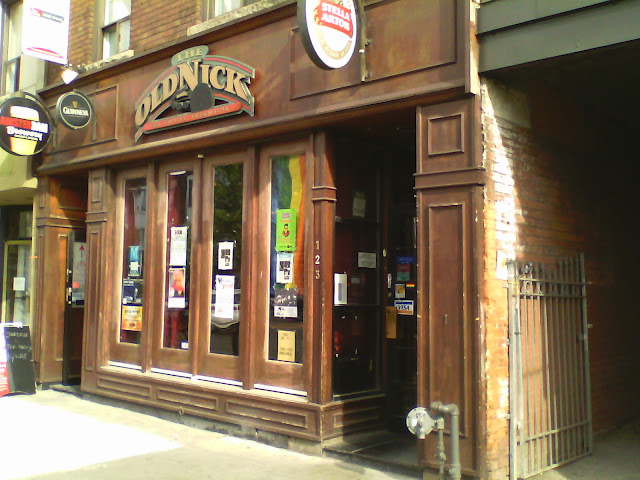 Here's some more regional cuisine. One of my neighbors is from Brazil and a heck of a nice guy and good human being too (like myself) who does a lot of extras for a particular charitable organization called the Red Cross (an organization I sometimes help). So I thought I'd grab a pic of these two restaurants just for him. Thanks for being a good human being there friend. I wish the world had more people like yourself Mr. Brazil. So check out Tapas at Embrujo for their incredible cuisine, live entertainment all of which can be seen on their web site. Rodeo (Rodizio) once again for authentic Brazilian cuisine and buffet. Both have a great atmosphere and look like a great place for an intimate date or just some great food. 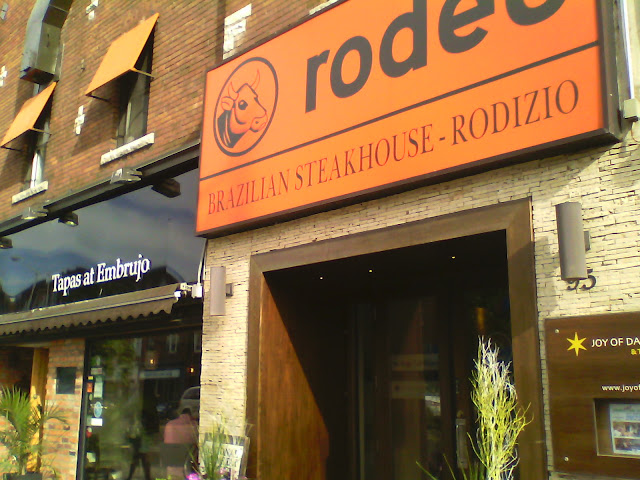 I like this building. Its a great design. My bank manager also told me that if I didn't put a picture with their company logo on it that they'd start charging me twice the amount of interest on my recently paid up but overdrawn account. The truth is that I like this building and my bank is a bit closer to home on Parliament Avenue. 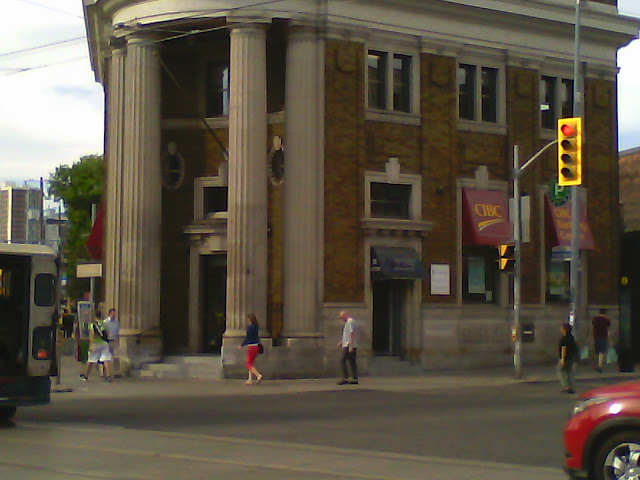 Not exactly on the Danforth but somewhere down Broadview Avenue just north of Gerrard Avenue this little restaurant and Cafe was holding an outdoor gig with a crowded patio. I walked by and took a picture from across the street  The city was alive with the sound of music, but alas Julie Andrews was nowhere to be seen. So I say we remake The Sound Of Music with Anne Murray! No! Wait! Avril Lavigne! Sandra Oh! With guest appearance by Drake! What do you think? Do you think that Disney would go for it? 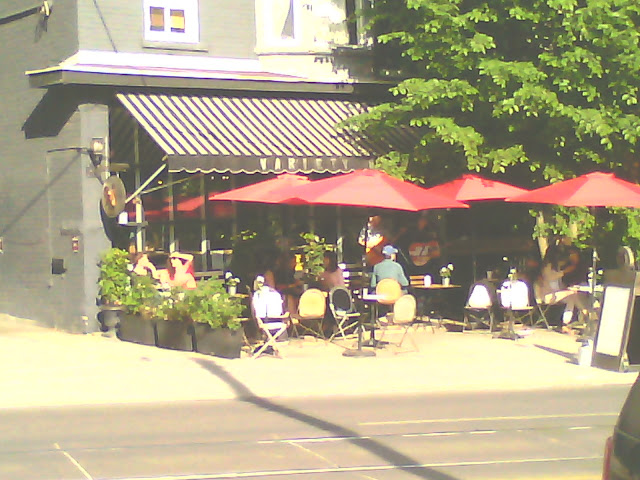 So with Pride month going strong the city seems to be quite active and alive with music. By the way I did finally make it to my destination to work for the day at Carlaw Avenue and Danforth Avenue. My back is just killing me and I'm out the door again tomorrow bright and early.
I'm currently looking into martial arts (again) and trying to decide between more traditional Karate, Wing Chun or even Aikido. I've studied Karate and Tae Kwon Do before (many years ago though I lack expertise). This time around I want to go for my degree (my black belt). One of the reasons is for some of the upcoming promo material related to Butterfly Dragon, Dragon Butterfly and Night Style (all of whom utilize a mixed style of combat with specialized techniques). Also I am looking at the possibility of getting into mocap for animation purposes (which would make choreographing the kind of sequence I'd like to do between the two leads possible. I'd also like to achieve this goal since it had always been something on my list.
Beyond that, look forward to the release version of The Butterfly Dragon I Heroes Of Our Own soon with a possible print edition possibly around the corner. Once I get distribution figured out that part might be under way very quickly (seeing as I have this and several other ready to go stories in that regard).
Thanks for taking the time to read a little bit about my city and we'll talk soon. I don't pirate other people's stuff. Please don't pirate my book. I literally live on next to nothing and spend a great many hours preparing my books, creating the artwork and getting them ready for release. Not to mention that amount of harassment and abuse I undergo from my own community which makes producing such a seemingly popular story very difficult.